This was a bit of a light week, work-wise, because I had a terrible cold for most of it. A lot of the work we do involves my reading out loud and I just didn’t have the energy (or the voice) for doing much of that. Still, we did get some work done. 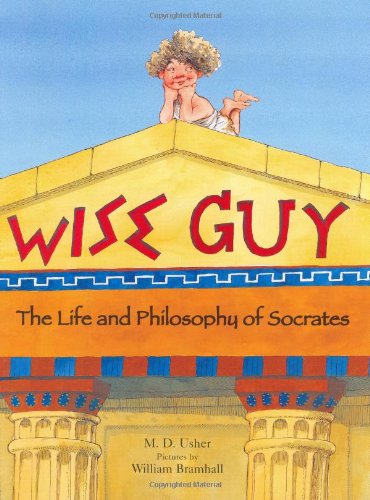 We are continuing our work on Ancient Greece. This week Lillia read Wise Guy: The Life and Philosophy of Socrates, written by M.D. Usher and illustrated by William Bramhall. One of the great features about this book is that there is a narrative aspect which provides an overview of Socrates’s life, but also on each two-page spread there is an info box with more detailed information about his life and philosophy. I’m not sure how Lillia read it, but I thought it was nice that there was an option to read just the story, or just the boxes, or both, in whatever order one chooses. The illustrations are also nicely done — Socrates is not often depicted as a child, but I think the illustrator did a great job of portraying him in his youth. We’re also still reading Black Ships Before Troy and just finished up the part of the story where Patroclus is killed. If you’ve read The Iliad then you know what happens next! (Hint: things don’t look good for Hector…) Next week, when my voice has returned, we will start reading about Archimedes as a nice way to tie the history of Science in to our Humanities unit on Ancient Greece. Because I was not feeling that great, Lillia picked up a lot of the slack this week. She did some great independent work in math, but she did get pretty frustrated when confronted with multiplying two-digit numbers with one-digit numbers (ex: 24 x 3). At one point she ran out of the house in tears, but then I looked out the window and saw her trying to solve the problem with chalk on the driveway. When I thought she was calm enough, I joined her and tried to explain the process. I think she got it, for the most part, and practice will help. I have noticed this year that Lillia really wants to be alone when working through a hard problem. She doesn’t want help, necessarily, unless she asks for it. I know it’s because she doesn’t want me to see her get the wrong answer. I am thinking about how to use this aspect of her learning style in a positive way. Suggestions?

I’m feeling a lot better now, so hopefully it will be full steam ahead next week.

This week Zane was very involved in an interesting construction project. My husband, Damian, has been working hard this past week to build me a desktop for my “office” in our bedroom closet. Zane was really enamored of the whole process, especially the parts that involved power tools! And, of course, once the boards were installed there was painting to do! Here he is “practicing” with some of the supplies. Also, I am pleased to say that Zane can now correctly identify red, orange, green, blue, purple, and brown, at least most of the time. Color blindness runs in my family, on my mom’s side, so there is a small chance that Zane is red-green deficient. Neither one of my brothers inherited the condition, so it’s possible that my mom and I are not carriers, but we have never had that confirmed. He has no trouble at all identifying red, but sometimes confuses purple and green. I don’t know if that’s because those colors look the same to him, or just because he hasn’t quite mastered them, in terms of labeling. He’s too young to take a color vision test, so we’ll just have to wait and see (no pun intended – ha!).

I’ve been wrestling quite a bit this week with the subject of women in philosophy. I ordered the Young Person’s Guide to Philosophy for Lillia and was thumbing through it when I noticed that there were only TWO women philosophers mentioned in the whole history of the discipline, dating back more than 2,000 years (Hypatia & Simone de Beauvoir). Was it possible that this was just an overly sexist book? I looked at the information about the assorted editors and consultants who helped to make the book…overwhelmingly female. And, to give the book’s author credit, he tried really hard to include women whenever possible (mentioning the contributions of wives and mothers seems to be a popular technique). But, it turns out that philosophy has been, and STILL IS, so male-dominated that these two women accurately represent women’s recognized (key word) achievements in the discipline of philosophy. Boy, does that make my blood boil. The old cliche that “women can’t think” is alive and well, folks. And, I’m not the only one who has noticed. If you’re interested in reading more, click on the links below. Now I’m on a quest to find a way to teach the history of philosophy to Lillia without bringing attention to the fact that 1/2 the population of the world has been virtually excluded from it…and still is. 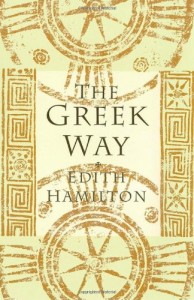 I have changed my mind…again. I decided to return to our history-based Humanities units. I had originally planned to go from Prehistory through the Roman Empire this year, but it looks like we will only get as far as Ancient Greece. Though there are those who might disagree with me, I think that the Roman Empire actually has more in common with the Middle Ages than Ancient Greece, anyway. Because of the breadth and depth of Ancient Greek culture, I am sure this unit will take us to the end of the year…and possibly beyond. My father-in-law lent me a copy of The Greek Way, by Edith Hamilton, and it was truly illuminating. She presents a very convincing argument about how different Ancient Greek culture was from any civilization before or after it. I highly recommend it as an introduction to Ancient Greek culture. And, Hamilton’s prose is so beautiful that it is worth reading just to be in close proximity to a truly gifted writer. (A great deal of The Greek Way is available on Google Books, or you can buy it on Amazon.)

It is Hamilton’s love of this culture that I hope, above all, to bring to our study of Ancient Greece. Here is a brief excerpt from her book:

Of all that the Greeks did only a very small part has come down to us and we have no means of knowing if we have their best. It would be strange if we had. In the convulsions of that world of long ago there was no law that guaranteed to art the survival of the fittest. But this little remnant preserved by the haphazard of chance shows the high-water mark reached in every region of thought and beauty the Greeks entered. No sculpture comparable to theirs; no buildings ever more beautiful; no writings superior. Prose, always late of development, they had time only to touch upon, but they left masterpieces. History has yet to find a greater exponent than Thucydides; outside of the Bible there is no poetical prose that can touch Plato. In poetry they were all but supreme; no epic is to be mentioned with Homer; no odes to be set beside Pindar; of the four masters of the tragic state three are Greek. Little is left of all this wealth of great art: the sculptures, defaced and broken in to bits, have crumbled away; the buildings are fallen; the paintings gone forever; of the writings, all lost but a very few. We have only the ruin of what was; the world has had no more than that for well on to two thousand years; yet these few remains of the might structure have been a challenge and an incitement to men ever since and they are among our possessions to-day which we value as most previous. There is no danger now that the world will not give the Greek genius full recognition. Greek achievement is a fact universally acknowledged. (Edith Hamilton, The Greek Way (New York: W.W. Norton Company, 1983), 12-13.)

With that in mind…

Lillia and the ever-present headphones… As mentioned above, we began our study of Ancient Greece this week. We are using R.E.C. Burrell’s Oxford First Ancient History as our spine. This week’s readings were about the Minoans. We learned a lot about this mysterious civilization. Did you know that the Minoans used three different languages and that, so far, we have only deciphered one of them? These include the as yet undeciphered Cretan hieroglyphs and Linear A. The one language that has been deciphered is a descendant of Linear A which we call Linear B and it belongs to the Myceneans (who we will be studying next week). While we may know a lot about ancient cultures, there is still so much work to be done! Two whole languages yet to be deciphered! Our ignorance of Minoan languages presents us with the opportunity to show our children that there are still mysteries to be solved, and that there are many ways to make contributions to our knowledge of the past. 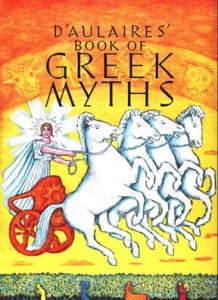 For the literature portion of our Humanities unit we are reading first D’Aulaires’ Book of Greek Myths, by Ingri and Edgar Parin D’Aulaire. While there are many books of Greek myths written for children, this one is ubiquitous. I have seen it on many reading lists, and it is quite popular with those who follow the Charlotte Mason method of homeschooling. I was concerned that it might be a little too “young” for Lillia, but she loves it! This week we read about the union of Gaia and Uranus (Earth and Sky) and about the birth of their many children. We learned about the cast of characters that make up the Greek pantheon, their home on Mount Olympus, and we started to read some of their individual stories (Zeus, Hera, Hephaestus, and Aphrodite). I’m glad I purchased this book because I think it will be something that Lillia will want to refer back to, even when we’re done with this unit.

We finally have in our possession the next Life of Fred book. In this volume we are diving right into multiplication. This week we learned 2×7, 7×2, 3×4, and 4×3. Lillia also had to do several Algebra problems involving these multiplication facts (such as 3y=12, solve for y). We’re definitely behind the school district math program in regards to multiplication. But, Lillia has learned so much extra math (important stuff that will make learning concepts much easier in the future) that I am okay with the fact that we didn’t cover all of the multiplication facts this year. She has plenty of time next year to catch up, and I’m sure she will. I received my final grade and am now a college graduate. I was a college graduate before, actually, because I received my A.A. in General Studies in 2005 (when prospects were bleak and I knew I wouldn’t be able to finish my B.A.). But, even as a teenager I always envisioned myself finishing four years of college. Four years turned into thirteen and half, but I did finish what I started and I am proud of that. Although it means nothing to them now, I hope that someday my children will look at my accomplishment and see that if you really want to do something, you will do it. It takes perseverance, toil, and a lot of support from friends and family, but anything is possible. I truly believe that.